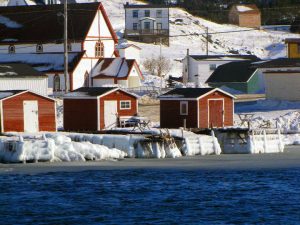 Scilly Cove (now known as Winterton) was first settled in the 1600’s. The first known census was taken in 1675. At that time, there were three planters, forty servants and eight boats recorded in the Town.

Three of the fishing captains living in Scilly Cove during this time were recorded as being Hopkins, Wicksell and Peyton. Some of the early settlers were fishermen whom originated from Dorset & Devon, England. The abundant catch of fish would be salted and dried on flakes and shipped to England in the fall.

The next record of settlement in Scilly Cove is found in the 1697 journal of Jean Baudoin – a priest who accompanied Pierre Le Moyne d’Iberville (New France explorer) on an expedition around the coast of Newfoundland.

Jean Baudoin reported that there were four houses along with fishing structures as well as livestock, which were all destroyed before the French soldiers departed Scilly Cove. English settlers fled to the nearby forest to escape the invaders.

In 1912, Scilly Cove changed its name to Winterton. Winterton took its name after Sir James Spearman Winter – a former Premier of Newfoundland.